My husband and I love to cook, especially big meals. When the family Thanksgiving plans started to circulate we were at first eager to do a turkey. Then my brother and sister-n-love volunteered  to handle the turkey, gravy and stuffing so we then began to divide up all the sides and desserts amongst the rest of the families. For a moment we were actually a tad relived that the overwhelming task of cooking a turkey wasn’t on our shoulders.

Then my mom called. They were expecting 20+ people to be at Thanksgiving and she was a tad nervous that one turkey wasn’t going to be enough for everyone to eat to their hearts content. So our relief was short lived.

For the past 7 years Albert and I have always cooked our turkey the same way… and it’s good, but we like change and my brother was going to be cooking his in the oven so we wanted to offer a different type of turkey. Frying seemed a little overwhelming to me personally so we figured, since it’s our first year as Texans we will smoke us a turkey.

Wednesday morning we lined our gumbo stock pot with a brining bag, made our brine mixture and let the turkey bathe in it for 24 hours.

After weeks of research, conversations with pros and friends we were ready for the big day. The only problem is, our family planned to eat at 12… which meant we had to start our turkey smoking adventures  EARLY.

1:30 AM early. Al got up and started the fire in the smoker and I headed to the kitchen to start the first pot of coffee.

About 4:30AM the smoker was up to temp and the fire was now a pile of hot coals. So out came the bird. We let it dry for about 30 min before basting it and putting it on the pit. 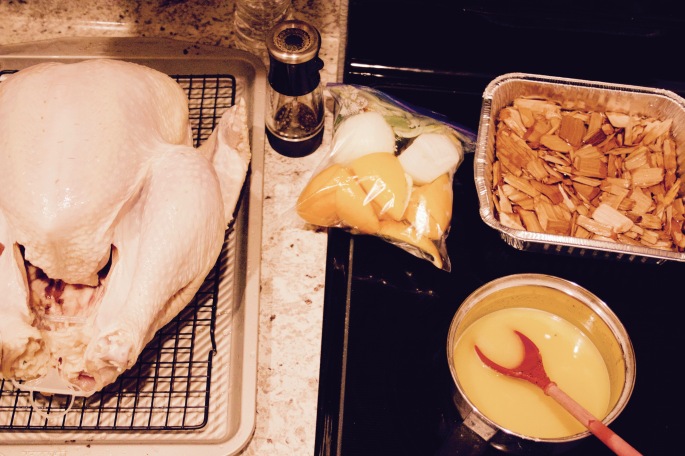 Over the next 8 hours, Albert stuck next to the smoker like glue. Tending the coals, basting the turkey and swapping out wood chips when needed. When we first put the turkey on the smoker we covered the wings with foil to keep them from overcooking and burning. About half way through we removed the foil and rotated the turkey.

The last 2 hours he sprayed the skin with apple cider every 15 minutes which made the skin nice and crispy and flavorful!

Finally it was done and it was worth every second! Albert was also really proud.

It didn’t last long once it was carved and on the table. It was so good we are ready to smoke another one for Christmas.

If you plan to smoke a turkey in the near future…. then here’s our 2 recommendations. 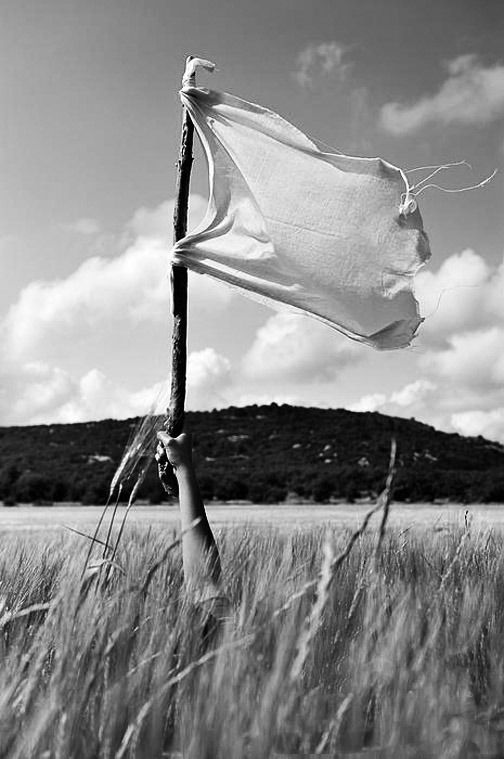 In light of recent events, it seems the world is in quit a tizzy. People are hurt and other elated. Only a few seem to  be respecting others as they process this elections outcome. Emotions are flying  from both sides.

For a moment, lets forget about the outcome and thing about the emotions you feel.

All emotions that you freely feel, opinions you have the freedom to post and voice. Protests and victory speeches that are a  part of you rights as an American. Rights that someone fought for. Men and women who risked their lives, lost limbs, lost friends all for you to freely express you how you feel.

These men and women have stories to tell. Near death experiences that they now live to tell about. Some of them experience guilt and depression that they survived. Other fight the battles, lose friends and  fellow soldiers all over agin, every night as they sleep. Their love for America is true. Their scares bear the proof.

Today is the Marine Corps Birthday. Tomorrow is Veterans Day.

For a moment can we raise the white flag and cease fire on one another to honor those who gave us the very right to debate in the first place? Can we show love to those who gave so much without thought of race, gender or political party? Can we put down our shields and swords and salute the ones that have survived defying odds? Can we shut our complaining mouths for one moment and be grateful for the lives we freely live?

Don’t let the election overshadow those who have served this country. Remember to thank a veteran for bravely doing what they were called to do, so you can do what you freely do.

It’s easy to look at the world and feel unappreciated. I’m sure there are times when you turn on the news and think “was it all worth it?”. Many of you quickly push the thought out of your mind because you know that America would look very differently if not.  The lack of gratitude is something you knew would come. Not everyone understands you and the pride you feel for this country. Some think that the choices you made were uncalled for, that the lives you took were unjust. Sadly, you feel that many of this upcoming generation doesn’t truly understand the state America was in and what needed to be done. Many of you feel that the lives you lived have now become stories and movies that we can’t relate too. I assure you they are not.

Although I may be only one person, I know there are more. More people who know the price you paid and the freedoms you fought for. We were once children raised by patriotic parents who reminded us often of the freedoms we have. Parents who taught us the importance of our voices and the cost of our rights. We have now grown to become parents ourselves and daily we raise our children to remember you and your sacrifices. Your stories are not just history, they are the inspiration in which we encourage our children to dream on. Thank you, for what you’ve done and for what many of you continue to do. It is not in vain. You are what makes America great.

Special thanks (and a Happy Birthday) to my Father -in- Law Albert Ledet III who spent 20+years as a Marine protecting my rights.

To my grandfather, Robert Bonner who served in the Army.

To all of my other family memebers and loved ones who have served or are serving. Your sacrifice is greatly appreciated.

Lets talk politics for a second. Today is a huge day, one that has seemed more of like a dream or comedy bit at times but still, this is happening. At the end of today we will have a new president and despite what some think, the world won’t come to a complete halt.

A few weeks ago, as early voting was going on, I had a conversation with my mom. She was telling me how she had voted and reminding me that I needed to do my American duty and vote early or on voting day (as you can see I’m heavily educated in political lingo). We talked for a bit and after we hung up it got me thinking. When I turned 18 and was able to vote, I did. Scared and confused by all the big words I walked in, stepped into the tent of doom and did exactly what my dad told me to do moments before. I sang a little jingle and pushed the buttons next to the names that were in my voting jingle, then cast my vote and walked out. I was young and way more interested in boys and shopping then even being aware of what was going on. As time went on and I got married, the job of “voting pep talk” shifted from my dad to my husband. Many of you may think there is a lot wrong with that and honestly I’m not here to debate with you on how I vote or even on how you vote. Lets keep it to, you do you and I’ll do me. ok  now back to that moment after I hung up from my mom.

s sitting in a parking lot, trying to think of my to do list and what exactly I was doing when my mom had called. After she called I thought for a moment, maybe I should learn more about politics, get more educated on things. Don’t get me wrong I’m not completely in the dark, I follow the major highlights, but I don’t speak the lingo like my husband, or my dad. I turn into a confused character when political lingo flies. My thoughts, for a moment were maybe I should change that. In my head some patriotic song started playing and I felt like an American flag was flying behind me as I spoke fluently ,what seemed like greek, about politics and convinced the world to change from the error in their ways and vote….. **SMACK**

Was that a shoe that just hit me in the face?

I spun my head around to see my 3 year old grinning from ear to ear that her impressive arm just hurled a shoe and managed to hit me smack dab in the face. As I could feel the temperature of my blood rise I realize that not only did a shoe hit me but reality with it. 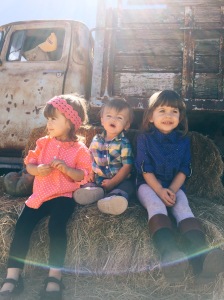 Reality is … I’m a mom of three, with a one, two and three year old to keep up with. The political lingo I speak involves, Bubble Guppies, Rusty Rivets and some strange creature named Wallykazam. The debates I watch are between my three and two year old on who’s turn it is to play with the yellow play dough (girls there are 4 yellow things of play dough why fight over one.) I spend my days ending hunger strikes from a 2 year old, informing my 3 year old that using an iron isn’t something she’s allowed to do yet and continually trying to keep my 1 year old from eating dishwasher detergent. #thestruggleisreal

I mean today I had to pull a popcorn kernel out of my 3 year olds nose cause she decided sniffing it would be an interesting thing to try. I mean do you honestly fault me for not spending 40+ hours trying to figure out if the Clintons were broke enough or not once they left the White House? And please don’t fault me for feeding my kids popcorn…. it’s one against 3 here. Compromise is apart of the politics and well survival for that fact.

So moms, I hope you voted! It’s important that are kids see us do it and that they understand that as Americans we have the right to vote and make our opinion count. But if you only voted for 1 or 2 things on a 5-page ballot it’s ok. If you walk into a poling place amped up, from a pre-vote pep talk from your husband (or dad) it’s ok. If you see friends of yours on Facebook ranting on in political lingo and you just scroll on by because you don’t really understand what’s being said…. Hey, It’s ok. You’re not alone.

Tonight someone will win. We will know if America has a girl or a boy after hours of aggravating labor. People will be upset with the result and others will be happy. Regardless of the outcome of the Presidential Election, if you go to bed tonight and everyone survived, you’re the real winner mom…. Most likely with the following expression on your face.

Most likely with the above expression on your face.